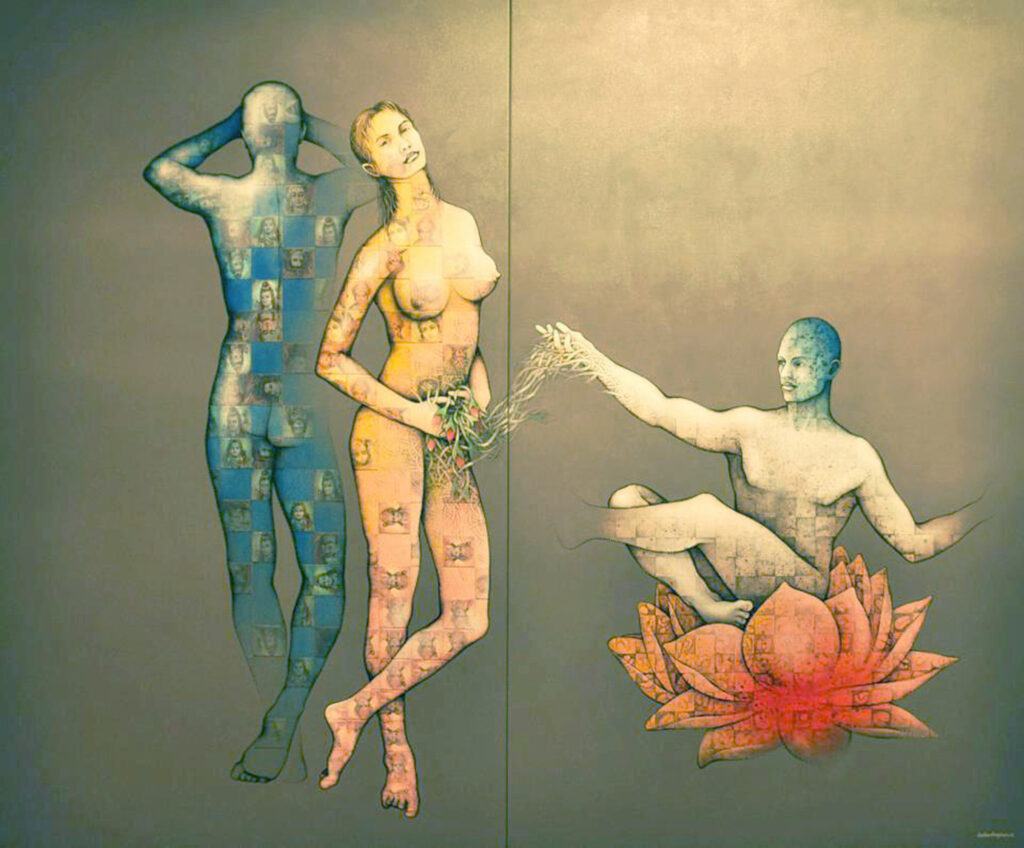 “First, I would tell (younger self) that little kid to speak, to any trusted person who might have stopped the sexual violence. Looking back, though, I realize there was no one. Certainly not my father. No teachers. Second, I would caution my younger self against impulse, and teach patience. I would get him to buy into the belief that life usually gets better if we just wait some time before blowing ourselves up.” — Balbir Krishan 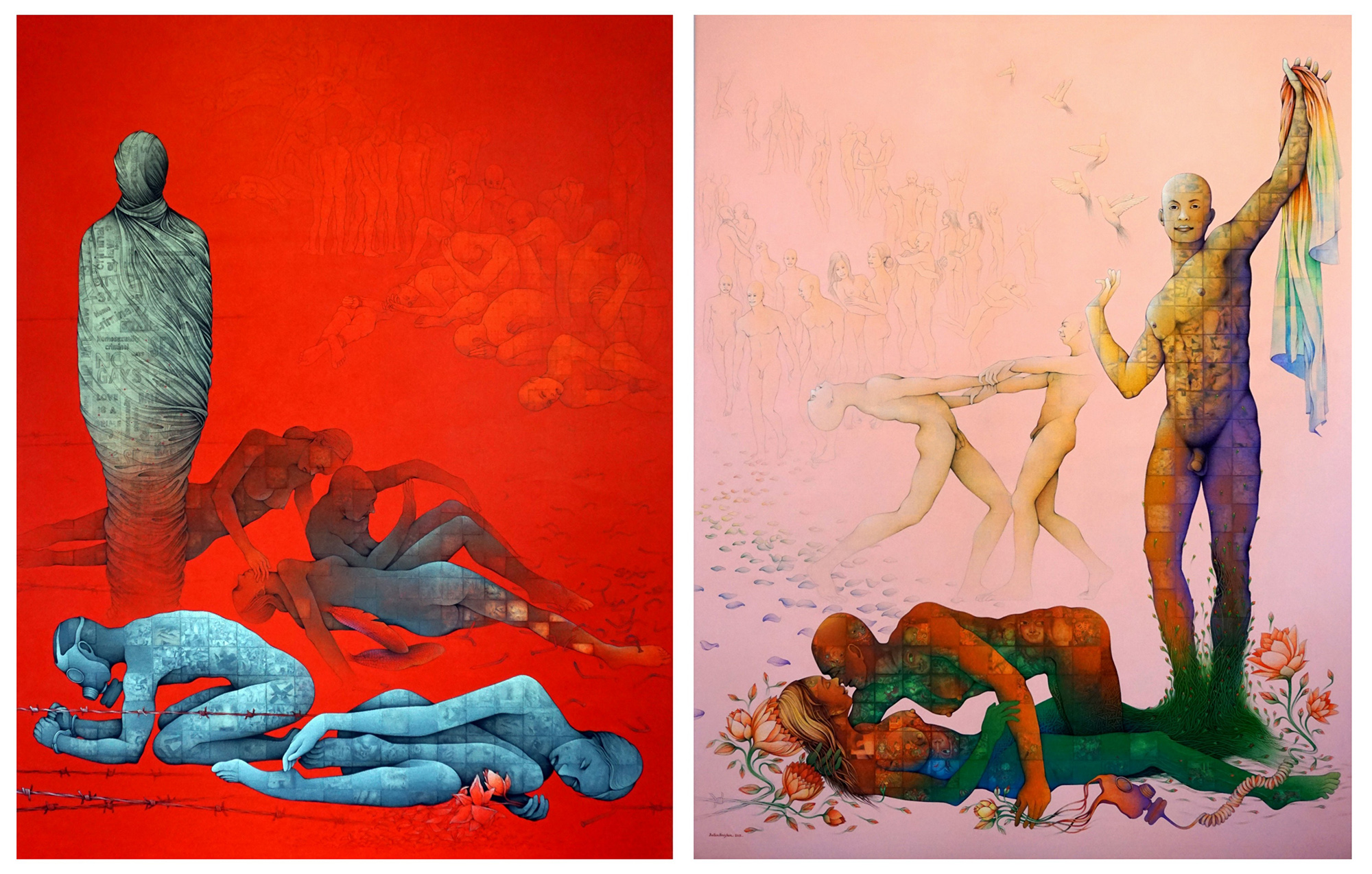 Balbir Krishan was born in Bijrol, Uttar Pradesh, India in the 1970s. During his childhood, local folk art drew Krishan’s attention, inspiring him with pottery, Hindu statues, movie posters and paintings on calendars during daily life. After growing up, he studied BA and MA in Visual Arts at Agra University in India. Krishan currently lives in Albany, New York, US. 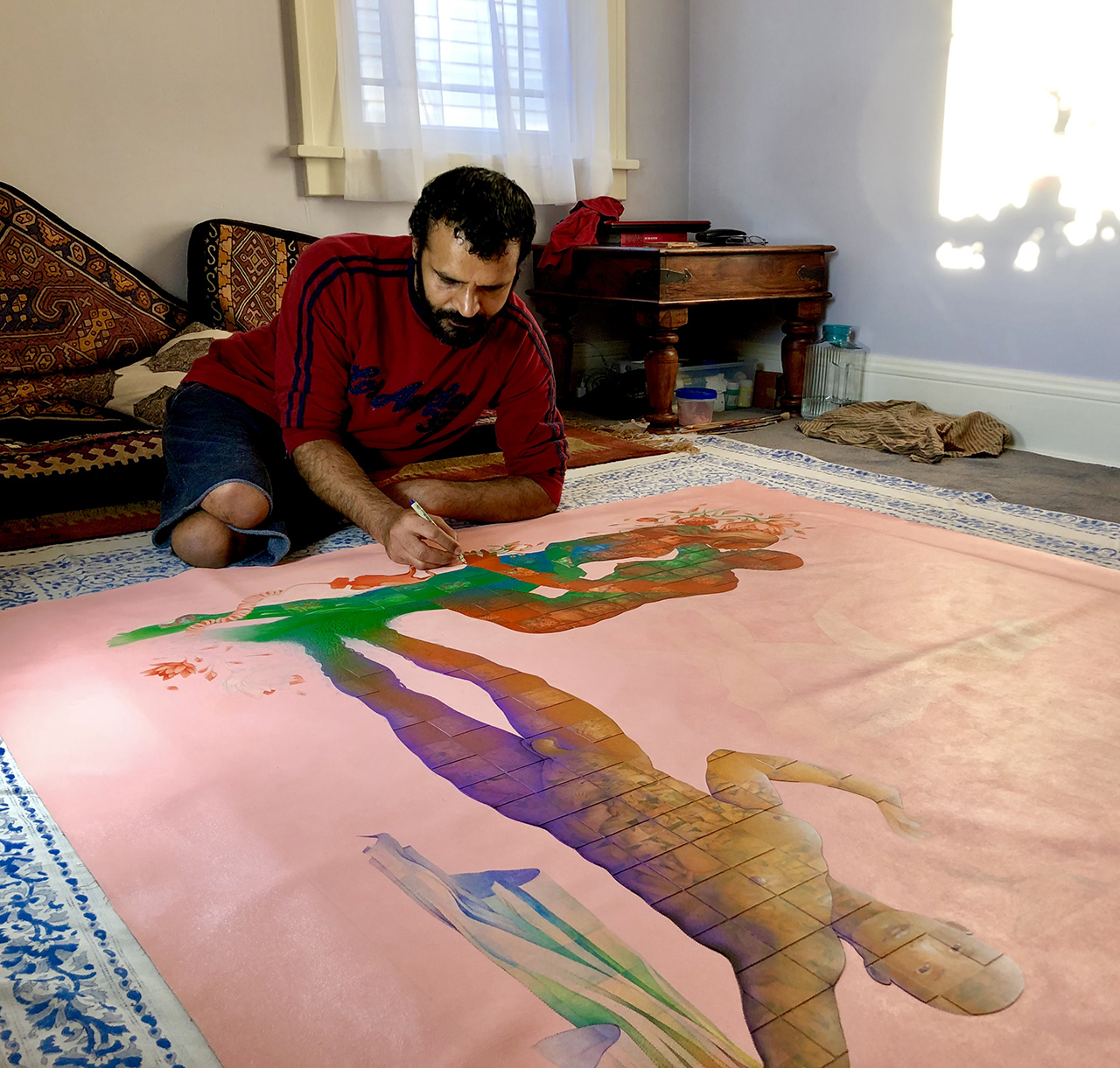 Life experience, Indian theology, human rights and social issues urge Krishan to keep creating. Through his human body painting by drawing and multimedia, he investigates the issues of individuals and society including race, sexuality and gender, freedom, equality, love, desire, pain, and struggle. Krishan’s body of work represents masculinity in reality and fantasy as well as the meeting point of utopias and dystopias. 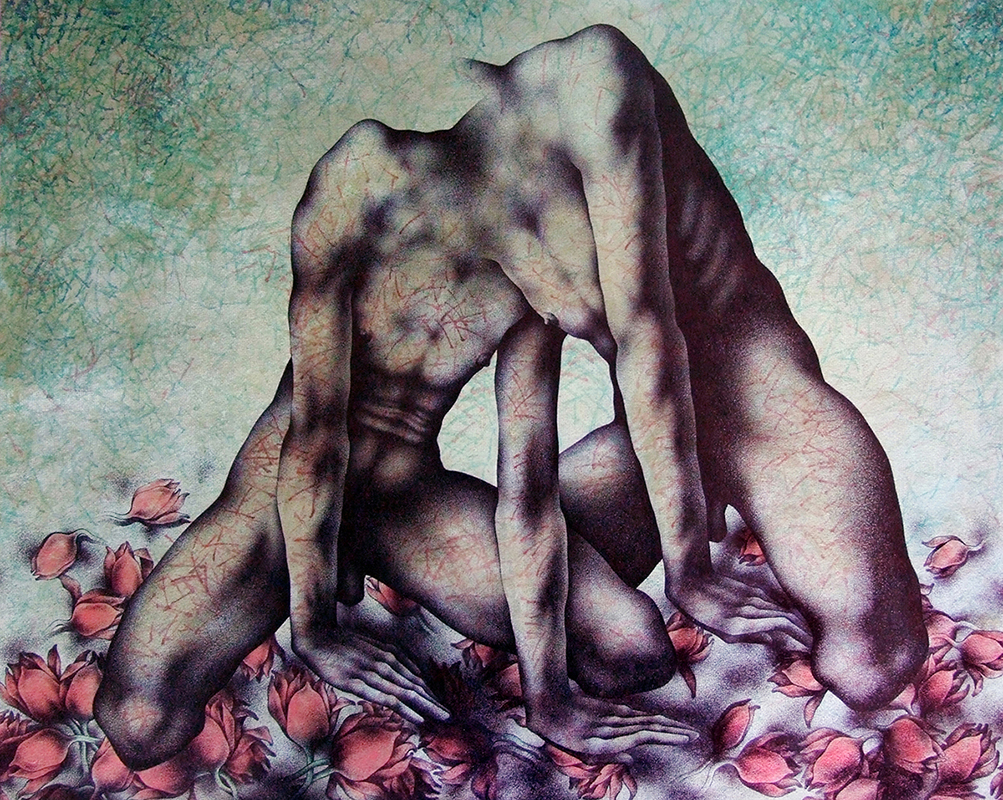 Balbir Krishan, ‘Dream of My Handicapped life’, 2009 | Image courtesy of the artist

Krishan is an openly gay artist who being honest and loyal to himself. Painting unclothed bodies is his signature mark, but his body of work is often misinterpreted, easily leading to a direct connection to his sexual orientation and identity. Krishanhas never described his work as ‘nudity’. He believes that it is a way of representing a normal state of mankind. All of his paintings, including his other works discussing street children, women, the general public, the terrorist attacks in Mumbai, the tsunami and disasters, represent the social, political and human rights issues through unclothed bodies. 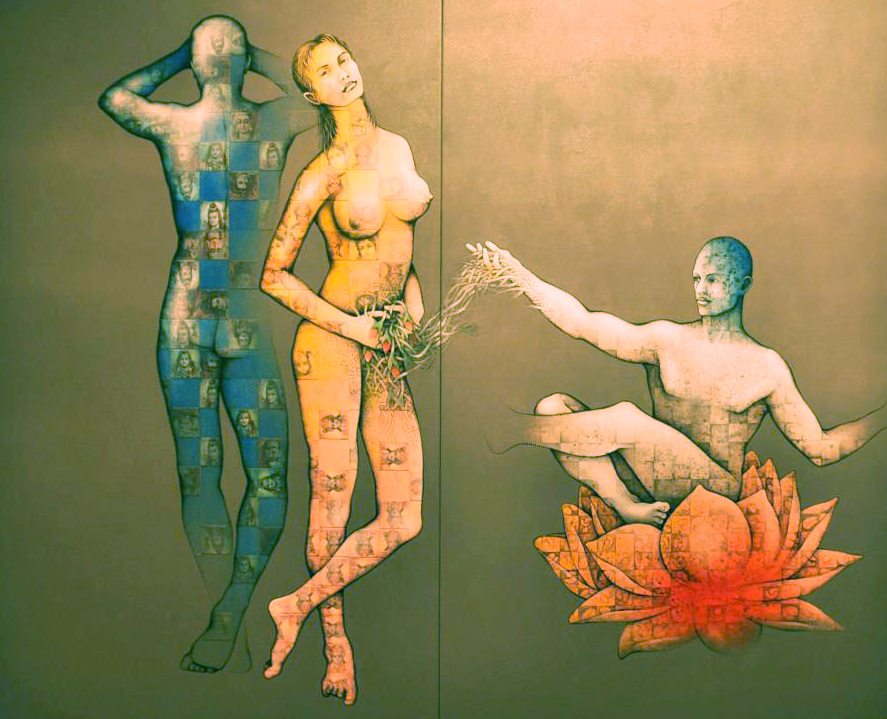 Balbir Krishan, ‘The Woman Inside; The fable of Shiva, Mohini and Harihar’, 2013 | Image courtesy of the artist and Sunpride Foundation

Constructing the texture of human skin by dots and lines

The year of 1996 is Krishan’s turning point in his life and art creation. Krishan tried to commit suicide by jumping into the train track in his home town as it was impossible to get the acceptance from his family and friends on his sexuality. In this incident, he lost two legs while facing financial difficulties in the family. Krishan had inadequate funding to purchase materials such as watercolor and acrylic for his paintings. During that period, he discovered that he was able to reduce and express his pain by using pens and ordinary papers for drawing. Art became Krishna’s antidote as a part of meditation to untie his pain and make him feel relaxed. Since 1999, Krishan hasused a pen to create on paper. He then referenced and quoted from anatomy, carefully crafting a series of dots, lines and other elements to form the texture of human skin. After a large-scale painting of multimedia created by transforming and printing the texture of human skin on the canvas, Krishan further kept drawing on the top of it. 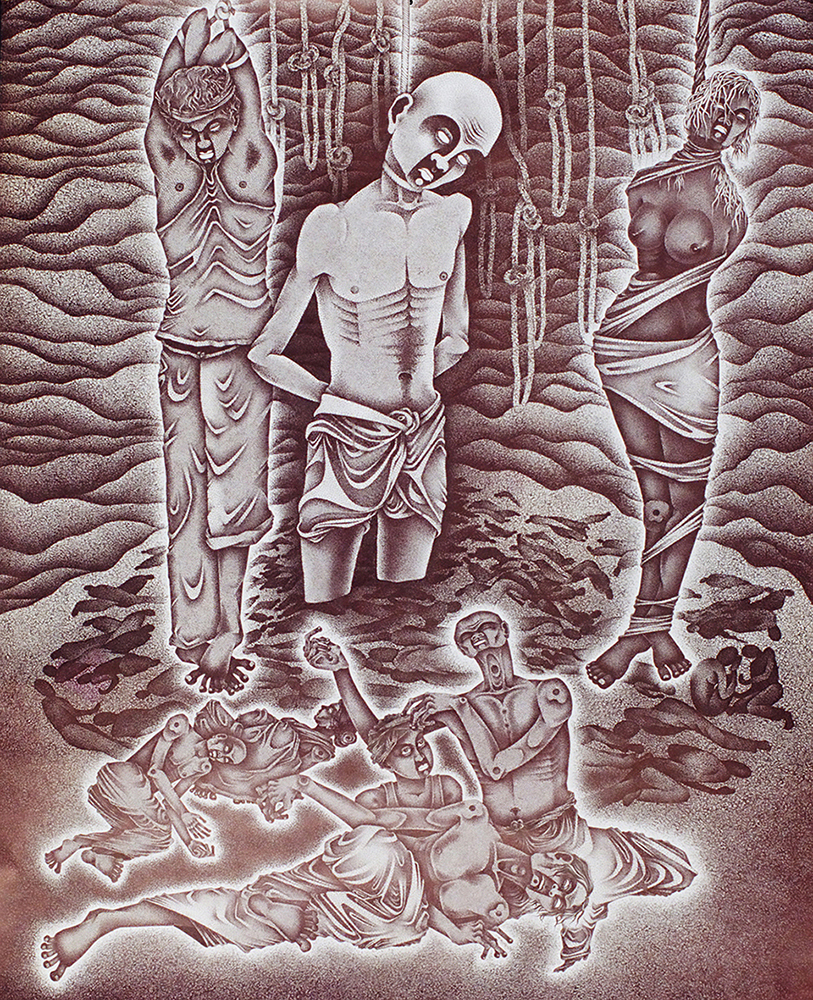 Balbir Krishan, ‘Massacre in Gujrat’, 2002 | Image courtesy of the artist 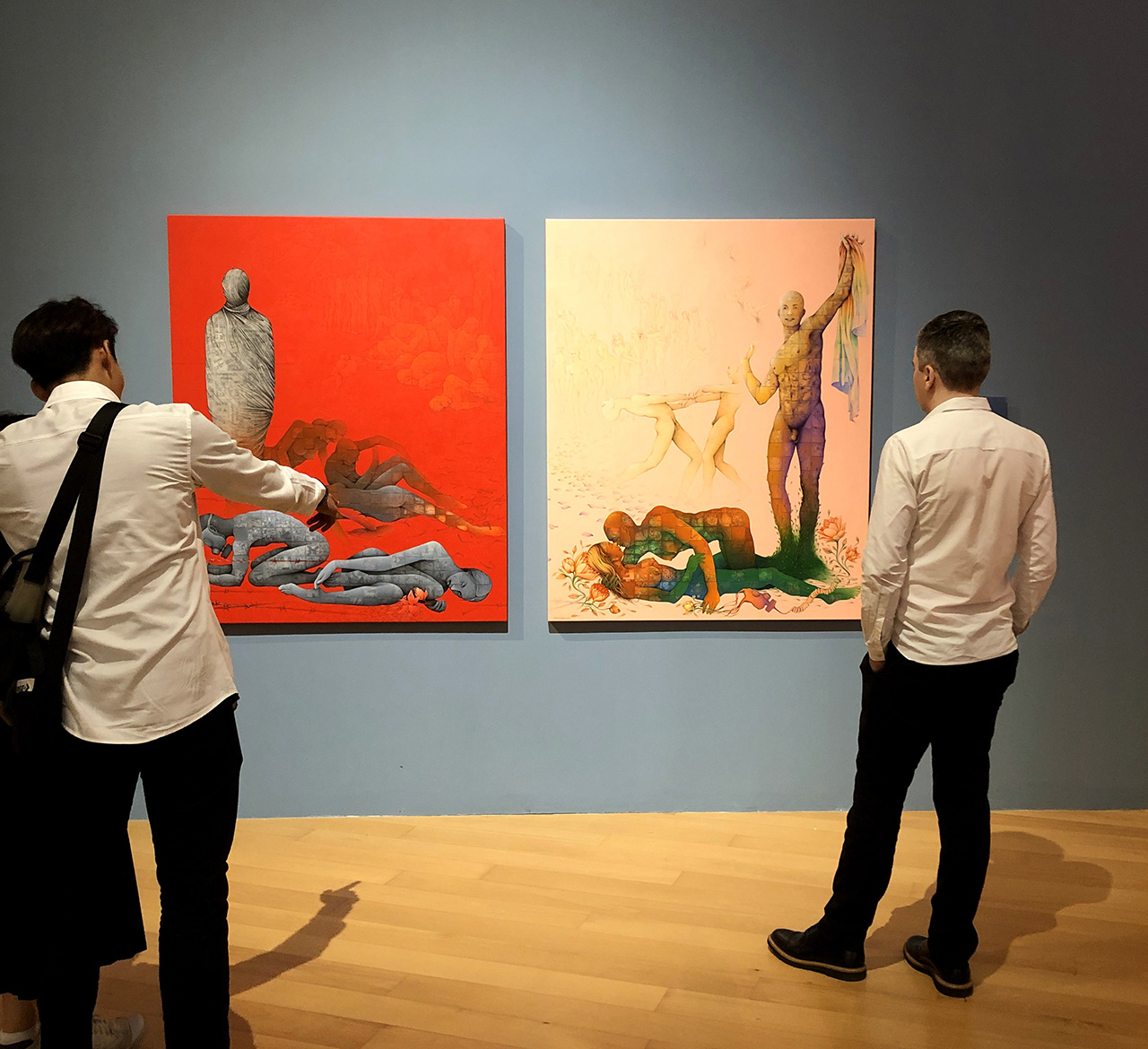 The inspiration of this work comes from ‘Section 377’, the regulation stigmatizing homosexuality. The huge difference in the living condition of homosexuals before and after the abolishment of ‘Section 377’ is embodied in the work. As India was British colony, the ‘India Penal Code’ under British colonial period has been continuously applied to India since 1861. The Chapter 16, Section 377 prohibits ‘sexual acts against any natural order with any man, woman or animal’. The ‘Section 377’ is not specifically targeting homosexuality, but it implies the sex acts of homosexuality, particularly male homosexuals. This clause can easily be misunderstood as anti-homosexuality in the public and re-appropriated by the police as a weapon harassing, threatening and blackmailing homosexuals. ‘Section 377’was abolished by the High Court of Delhi in 2009 while it was reimplemented by theSupreme Court of India in 2013. After several years of fighting, ‘Section 377” was officially repealed in 2018. This clause in former British colonies including India, Australia, New Zealand, and Hong Kong has been successively abolished, but there are still other former British colonies that retain ‘Section 377’ today, such as Singapore, Malaysia, and Burma.