“I want to use a kind of individual perspective to get to the society and era, and try to show the appearance of human existence. I want to discuss the state of ‘people’ in the phenomenon, not the social phenomenon itself.’
— Tseng Chien-ying 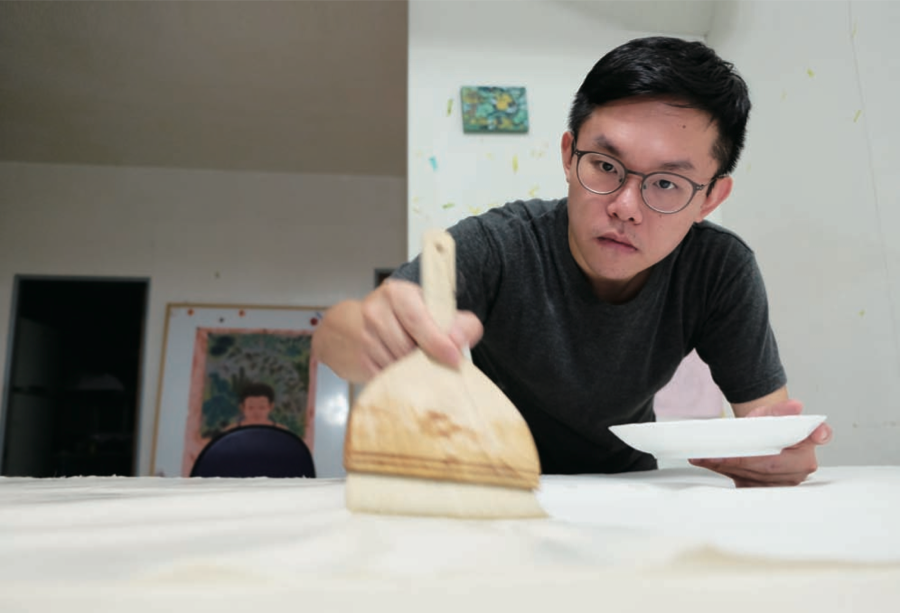 Tseng Chien-ying in his studio | Image courtesy of the artist

Born in 1987 in Nantou, Taiwan, Tseng Chien-ying has been constantly exploring the ink painting techniques of plain drawing and color gradation, particularly inspired by Buddha in Dunhuang’s mural paintings during his studies in National Taiwan Normal University and National Taipei University of Art. After school, he has been self-studying acrylic paintings. Tseng applies the ink painting techniques in his work, but he thinks that it is more appropriate to describe his paintings as “the painting by the oriental medium and material” rather than “ink painting”. From his perspective, creation itself is to respond to the era’s spiritual characteristic, and material is the creation’s spiritual extension. His work focuses on the aspect of contemporarysociety and real life, representing the mental state of people in the real society and observing people through painting people. 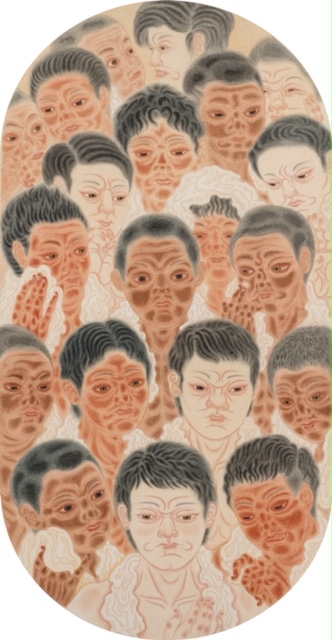 The notion of a living being in Tseng’s eyes

Tseng thinks that the suppression, brought by people’s deep-rooted bad habits, the ugliness in reality and injustice, is the real scenario in our life. After assigning as a counselor during his military service, he approached many youths dropout from schools, who are regarded as behavioral deviations. In that year, Tseng felt the irreversible reality and ubiquitous bullying from his experience. This led him to believe that the person is unable to determine the choice, whether “right” or “wrong”, particularly under tremendous oppressions that are hard to resist, no power to resist or unwilling to resist . The “absoluteness” becomes more and more obscure in this group of people. Through his paintings, Tseng depicts the absurdity and darkness he sees, and explores the discomfort of the mind and body or the sense of violation in social life. The cruel, absurd and nihilistic elements are integrated in the meticulous form,  highlighting the potential violence in the society felt by individuals and creatinga contrast to the content. The viewers are led to face those often overlooked circumstances in reality.

The “Body” is the focus of Tseng’s creation in the past few years. “Wildfire” (2017), one of his works, has been shown in the largest Asian LGBTQ themed exhibition “Spectrosynthesis II”. The figure, wearing a pressure suit, is reappropriated from the suffering image of Saint Sebastian. The pressure suit is a protective tool during burn medical treatment, which looks like naked but covered. This dual meaning reflects Tseng’s observation on contemporary bodies. In Tseng’s view, the objects hiding faces and bodies, including the pressure suits and masks, embody human bodies with invisible dogmas, values or constraints. After the arrowheads are replaced by the toy suckers, the state of being hurt turns to a strange performance, leading the idol in the sacrificial altar as a mirror that reflects the ridiculous and cruel in our existing era.